We take great pride in awarding markers of excellence each year to fine craft artists showing mastery of technique and originality of design.  Below is a description of each award and the recent recipients of these awards. 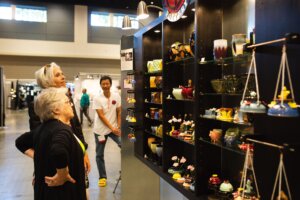 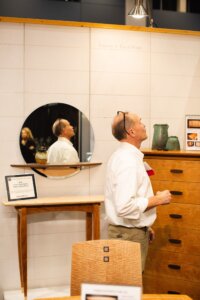 The Award of Excellence is presented by Cedar Creek Gallery as the mark of excellent work deserving of special recognition. $250 award. 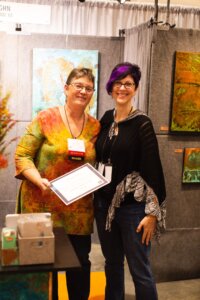 In 2005, the first Jan Gregg Award was presented to Jan in honor of her commitment to craft and her service to the Carolina Designer Craftsmen Board of Directors for 36 years.  Jan’s dedication and efforts to realize a guild organized by craft artists and for craft artists is greatly appreciated.  $150 award. 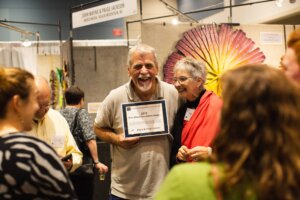 This award is presented in memory of and to support and nurture artistic education and achievement in keeping with the joyous creativity and artistic spirit of Dino Read.  $1,000 award. 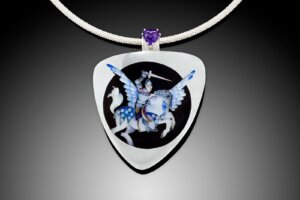 2017 recipient, Sandra McEwen, had this to say about receiving the scholarship: “I was honored to receive the Don H. Johnson Scholarship Award in 2017. Although I never met Don, his family was gracious, kind and enthusiastic about my work—It was such a pleasure to meet them and hear stories about Don! The award itself was a welcome addition, and I used the funds to travel to meet other enamel artists, as well as to purchase some equipment to make educational videos on enameling. Don’s generosity has inspired me to share my knowledge of enameling and I hope to pay it forward some day!” Pictured here is her necklace, entitled Perseus. 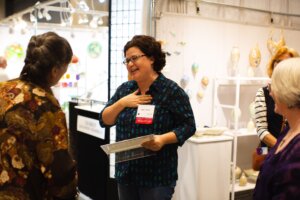 This award was created in honor of Don H. Johnson – whose life was spent in the pursuit of the magic and alchemy of “making”. Don began his exploration in art and the creative process through music and poetry. It was his joy and passion to explore, discover, share and encourage others.

Therefore this award is open to all disciplines of art by the exhibiting artist members of CDCG participating in the show; an organization Don loved and believed in. It is our hope that this will allow others a unique opportunity to further the pursuit of their own passion and self-exploration! This $1,000 award, presented by Creative Metalsmiths, must be used for an educational quest.